An affordable option for independent travellers

Dar Mystere is a traditional Moroccan courtyard house, or dar, available for up to 6 people to rent exclusively sharing in 3 bedrooms.

From as little as €40 for two sharing per night (plus an additional €20 per extra person), guests have exclusive use of the house.

It is perfectly located for the first time visitor to the ancient medina of the former capital city of Morocco.

Dar Mystere is an affordable option for independent travellers who prefer privacy and value their own space. Single occupants, couples or small parties can experience the harmony, simplicity and beauty of Moroccan life 'behind closed doors' in the mysterious ancient medina of Fez.

We are now accepting booking for the Fez Festival of Sacred Music 2019 which runs from 14 - 22 June this year. There is more information on the festival here.

You can contact us for a personal quote or make a booking through our TripAdvisor page.

Tangier: From the Romans to the Rolling Stones - review
Suzanna Clarke
No comments 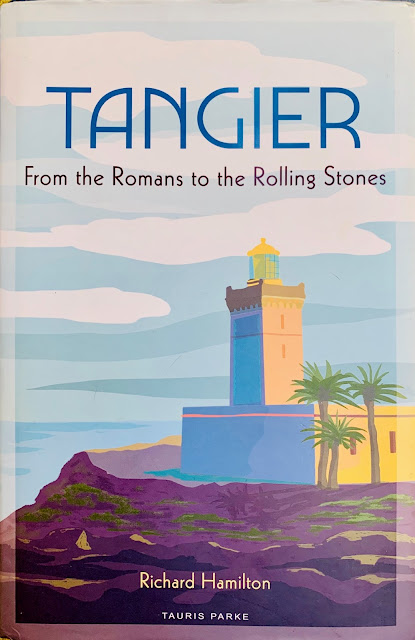 A new book by Richard Hamilton tells the story of Tangier though the stories of its best known residents - historical figures; writers; artists and musicians  Some cities have names that evoke much more than the sum of their everyday realities. Mention "Casablanca", and those unfamiliar with Morocco will wax lyrical about the Humphrey Bogart movie. Say "Tangier" and response is likely to be the Beat Poets, Paul Bowles and William Burroughs - all foreigners who produced some of their best work there. Yet, Tangier is much culturally richer than this, as can be discovered through the pages of Richard Hamilton's latest book, Tangier: From the Romans to the Rolling Stones. "Much of Tangier's history is a chronology of foreigners and exiles." Hamilton writes. "Nearly 3,000 years ago the Phoenicians set up trading colonies on the coast and ever since, the local inhabitants have, much to their bemusement seen waves of successive civilizations come and go, imposing their lifestyles upon them. Carthaginians, Romans, Vandals, Byzantines, Arabs, Portuguese, British, Spanish and French have all occupied the region in their time." Tangier: From the Romans to the Rolling Stones is impeccably researched, erudite, and with flashes of humour. Hamilton weaves the history of the city and its antecedents into a complex carpet; managing to capture the atmosphere of faded glory; of a history little regarded by the present day occupants. He quotes Moroccan novelist, Lofti Akalay, "Tangier is a town where people talk of elsewhere. There is a local saying: Tangerines have one eye on the sea, one ear on the news, and one buttock on the rocks." "We are separated from Europe by 14 kilometres and as many centuries." The chapters of the book are replete with entertaining stories about the likes of the Roman god Hercules, Roman statesman and general Quintus Sertorius, independant ruler of Spain and the defacto governor of Tangier; Arab explorer Ibn Battuta; diarist Samuel Pepys; journalist and fabulist Walter Harris; artist Henri Matisse; writers Paul Bowles and William Burroughs; poet and painter Brion Gysin; painter Francis Bacon; playwright Joe Orton; writer Mohamed Mrabet and musician Brian Jones. However, that isn't where the cast of characters ends. Renowned names who have also played a part in Tangier's history also get a look in - among them,  Samuel Beckett; Barbara Hutton; WH Auden and Rita Hayworth. Despite brief sojourns by female authors such as Edith Wharton and Patricia Highsmith, and a longer one by Jane Bowles, the major writers and artists associated with Tangier are overwhelmingly male, and Hamilton's book reflects this. Pepys's take on seventeenth century Tangier was far from flattering: "Nothing but vice in the whole place of all sorts for swearing, cursing, drinking and whoring," he wrote. Matisse's visit in 1912 was in another dimension entirely. On a journey to Tetouan, he wrote, "We rode in among this sea of flowers as if no human being had ever set foot there before." For Paul Bowles, who first travelled to Tangier in 1931 the city became synonymous with his work. "Back in New York, Bowles achieved success as a composer, but pined for Tangier. 'I tried to drown my melancholy in my work,' he said, 'but I was obsessed by memories of the air and light in North Africa.' He moved there in 1947, and went on to develop his skills as a writer, and create his most famous works such as The Sheltering Sky and The Spider's House. He also made extensive recordings of traditional Moroccan music for posterity. Richard Hamilton is a professional broadcast journalist who has worked for the BBC World Service. He has spent time reporting from Morocco, South Africa and Madagascar. While in Morocco he co-authored the Time Out Guide to Marrakech and has written throughout his career for various newspapers and magazines. That Hamilton has a huge affection and deep fascination for Morocco is clearly evident. The country has a long history of storytelling, as he recounted in his earlier book, The Last Storytellers: Tales from the Heart of Morocco. That was a collection of stories, as told by five storytellers from Marrakech's famous square - the Jemaa el Fna. "...Marrakech's marketplace, sacred space, cultural crucible, melting pot and meeting point for centuries." His book on Tangier, too, is composed of a series of stories, of lives which intersect through space but not time, to give an impressionistic portrait of the city. "Tangier seems to be suspended in unreality," he writes. "It escapes definition and defies categorization...Tangier has been hailed as a paradigm for international cooperation and a cradle of creativity, but it is also a kind of museum of failure, a graveyard of ambition." "Maybe the city that has survived waves of invasions by Carthaginians, Romans, Vandals, Byzantines, Arabs, Portuguese, British, Spanish and French can now endure a new wave of development?" he asks. Of the economic impact of the port of Tangier Med; of the proposed Chinese funded technopolis, of empty houses inhabited by a multitude of squatters waiting for their chance to jump on a boat to Europe, undercover of darkness, there is little sign in this book. Tangier: From the Romans to the Rolling Stones is an unashamedly nostalgic look at the inspiration, and occasional despair of which the city has long been a source. "Perhaps in the end Tangier is us," Hamilton writes. "It reflects humanity itself." Review by Suzanna Clarke Tangier: From the Romans to the Rolling Stones by Richard Hamilton is published by Tauris Parke 2019.  In Fez, Morocco, it is available from the ALC-ALIF Bookstore, CLICK HERE.  SHARE THIS!
Read more
Jazz Fusion Concert in Fez
The View From Fez
No comments 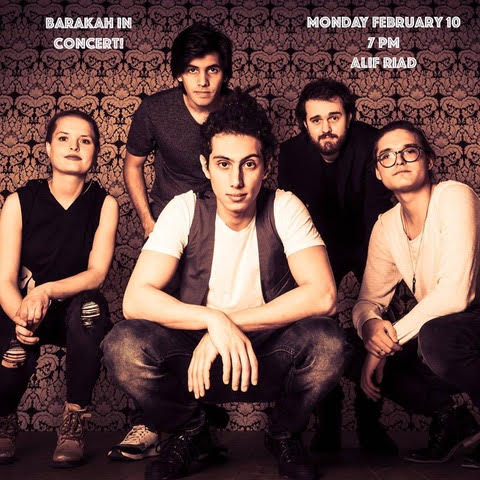 Barakah in Fez: Jazz Fusion Concert.  Monday, Feb. 10 at 7 PM.  ALIF Riad, 6 Derb Drissi, Batha, Fez Medina Barakah is a Vienna-based band with emphasis on fusion music. Through the fascination with free improvisation, rhythmical richness, world music and the exploration of new sounds, the Egyptian drummer Sherif Abdalla and the Austrian saxophonist Anton Prettler founded the band ''Barakah'' in summer of 2017. Soon afterwards, the band expanded to five musicians. The pianist Paulo Correa from Paraguay, the bassist Markus Dutka from Austria and German violinist Constanze Friedel joined them and added their own ideas of music to the band. Together they explore, experiment and try to exceed their own creativity. With absolute artistic freedom the band Barakah, or ''blessing'' in Arabic, strives to live out its meaning and create its own distinct style of music. Members: Anton Prettler - Sax Martin Demmer - Guitar Xiaotong Tong - Trumpet Paulo Correa - Keys Markus Dutka - Bass Sherif Abdalla - Drums Here’s an example of their brilliant work: Click here This concert is free and open to the general public. SHARE THIS!
Read more
Fine Art Photography Workshop with Nicol Vizioli
The View From Fez
No comments 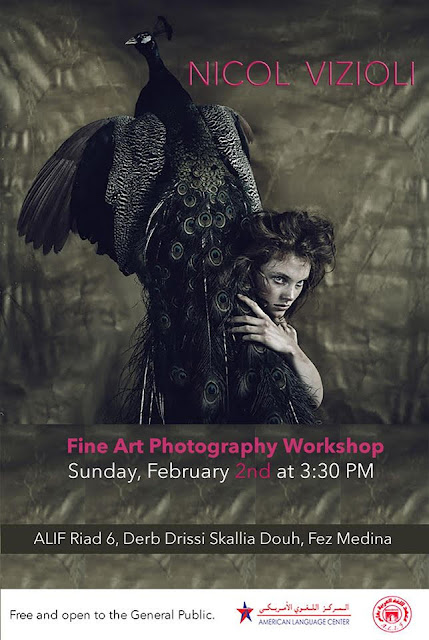 Fine Art Photography Workshop with Nicol Vizioli, Sunday, February 2 at 3:30 PM,  ALIF Riad, 6 Derb Drissi, Batha, Fes Medina. Nicol Vizioli is an Italian artist whose practice is mainly based on photography. Coming from a fine art background her work draws upon many different influences: the natural and animal world, mythology, literature and finally painting. Her photographic work is the convergence point, a visual realization of these imaginary worlds. With the same principles, Nicol is also exploring different media, and she is currently working on her second film project. After a degree in Cinema she moved to London, where she received an MA in Photography at the University of the Arts, London. Her work has been exhibited in international art fairs such as Scope Basel, Miami, Somerset House, the Zabludowicz Collection, The XV Biennale de la Mediterranée, Milan, London and many others. This workshop, organized by the ALC-ALIF Photography Club, is free and open to the general public. SHARE THIS!
Read more

Reviews from our guests

"This is one of the most unique accommodations I've had".  Read more

"The terrace, calm and sunny is conducive to relaxation!".  Read more

"Ideal location between the main streets of the medina".  Read more

"Great base in a great city".  Read more

"Riad ideally located for a total immersion in the heart of the medina in Fes".  Read more